Khuda Haafiz 2 Controversy: Bollywood superstar Vidyut Jammwal’s upcoming film Khuda Hafiz 2 has been mired in controversies before its release. In fact, people of Shia Muslim community have raised objections about the song Haq Hussain of the film. Due to which a new trouble has emerged for Khuda Hafiz Chapter 2. In such a situation, the film makers have to apologize for this song.

what is the whole matter

Actually, recently the song Haq Hussain from Vidyut Jamwal’s film Khuda Hafiz 2 was released. Seeing this song, people of Shia community have expressed anger. According to him, the use of the word Hussain in the song and the scenes shown are objectionable. In such a situation, now the makers of this film have written a note apologizing. In this note shared on social media by the makers of Khuda Hafiz 2, it has been written that we apologize to the people of the Shia community. It was not our intention to hurt anyone’s sentiments. Changes will be made inside the song Haq Hussain of our film. Under the leadership of the censor board, the lyrics of the song will be Haq Junoon instead of Haq Hussain. Along with this, the scenes of Blade and Matam Zanjeer will also be changed inside the song. 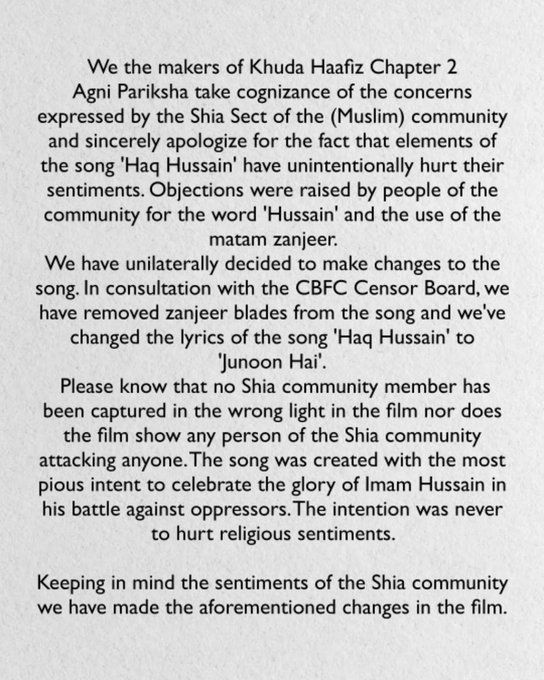 Not only this, while changing the lyrics of the song Haq Hussain of Khuda Hafiz Chapter 2, the makers have also said that through this song we only want to show the saga of the glory of Imam Hussain. Were. In such a situation, it was not our intention to go against any kind of religious sentiment. In such a situation, we promise to the Siya community that all these objections will be completely changed before the release. It is known that Khuda Hafiz 2 will be released on 8th July.

Dharavi Bank: Dharavi area of ​​Mumbai will see a stir, Sunil Shetty-Vivek Oberoi will have a surprising character

Chetan Anand And Priya Rajvansh Love Story: Kk Menon And Jacqueline Fernandez Will Be Lead Character – Biography: The story of the actress who will come on the big screen, was done by the sons of her lover, who was brutally murdered