Actress Raveena Tandon is very active on social media. Along with film updates, she is often seen giving her opinion on social issues as well. Once again Raveena Tandon appeared in her familiar style. She mentioned the struggling days of her teenage years, when she used to travel by local train and bus. Raveena told that during this time she has been a victim of molestation by many strangers. Actually Raveena has said this whole thing on the issue of ‘Aarey Metro 3 Carshed’ project. After this some users started trolling him, then Raveena shut his mouth too.

Let us tell you that Maharashtra is in constant discussion these days. Sometimes due to political upheaval and sometimes about the ongoing development projects there. Recently, Maharashtra has got a new Chief Minister in the form of Eknath Shinde. With Shinde becoming the CM, one issue has come up again and this issue is ‘Aarey Metro 3 Carshed’. In fact, to make it, the Aarey forest will have to be cut, against which not only the general public and politicians, but also cine stars are coming forward. Actress Raveena Tandon is also one of them.

Actually, Raveena Tandon is a nature lover. She is always seen raising her voice for the environment. She wants that forests should not be damaged because of ‘Metro 3 car shed’. Recently, when a user asked Raveena Tandon about the struggle of Mumbai’s middle class, Raveena remembered her teenage days. Expressing his grief, he tweeted, ‘During the days of teenagers, traveled by local trains and buses. Being molested, molested and all that happened that most women go through. I bought the first car in the year 1992. Welcome to development. But, we are not responsible for just one project, but we have to be responsible for all the forests we are cutting instead of protecting the environment/wildlife. 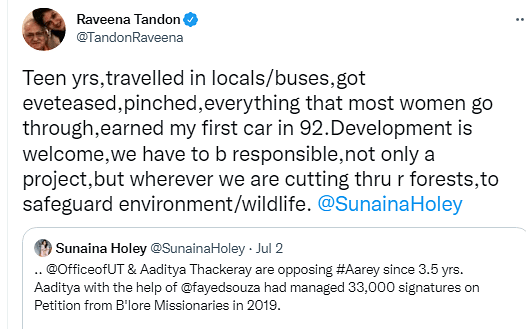 On this, another user asked Raveena Tandon when was the last time she traveled in a local train, which she is against metro? On this, Raveena once again revealed the physical abuse that happened to her. He wrote, ‘Till 1991 I traveled like this and being a girl I was physically harassed by unnamed trollers like you. Before starting work I saw success and bought my first car. You belong to Nagpur, your city is green. Don’t think about anyone’s success or earnings. 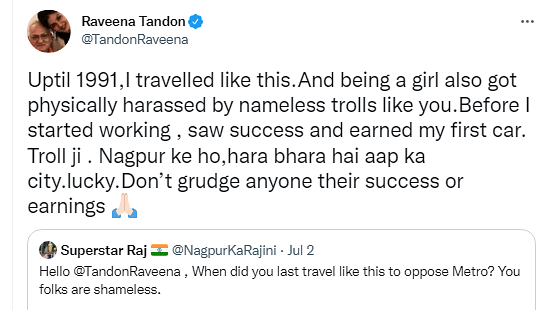 ‘I am absolutely fine’ Shruti Haasan reveals about her health

Mouni Roy Pics: Mouni Roy gave a ravishing look in crop top, you will also be left sweating after seeing the photos