The actor praised him for his success story – from being an auto-rickshaw driver to becoming the Chief Minister of Maharashtra. Sharing a picture of Eknath Shinde on her Instagram Stories on Thursday, Kangana wrote, “What an inspiring success story…From driving an auto-rickshaw for a living to becoming the most important and powerful people of the country. ..congratulations sir.” 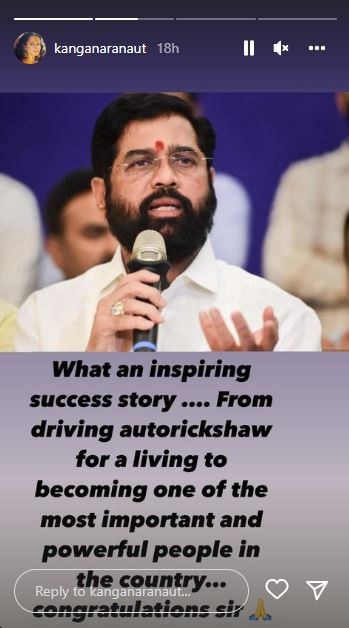 In the last few years, Kangana has been at loggerheads with the Uddhav Thackeray government and she has also pulled up on several occasions on her social media accounts. Kangana had also recently reacted to Uddhav’s resignation from the post of Chief Minister through a video on her Instagram.

He said in the video, “In 2020 I said that democracy is a belief system. And those who destroy this belief system in the greed of power, their pride will be destroyed. It shows the character of a person.” During the recent political crisis in Maharashtra, an old video of Uddhav about the demolition of his new office went viral. He had said in the video, “Uddhav Thackeray, what do you think? That you along with the film mafia took revenge on me by demolishing my house? Today my house has been demolished, tomorrow your pride will be destroyed. About. Remember.”

Uddhav Thackeray resigned from the post of Chief Minister after the political crisis in the state. The Bharatiya Janata Party was declared the new ruling party of Maharashtra and Eknath Shinde was appointed as the new Chief Minister. Kangana has been a vocal supporter of BJP.

On the work front, Kangana will next be seen in ‘Tejas’, in which she plays an Indian Air Force officer. The film is going to release at the end of this year. She is currently working on her production venture, Emergency. She will be seen in the role of Indira Gandhi in the film.

‘If I had a daughter, I should be like Kangana…’, Kangana Ranaut gave this reaction on Rekha’s statement

Milind Soman made a comeback with Shirngaar after 25 years, fans were surprised to see the actor’s look at the age of 56